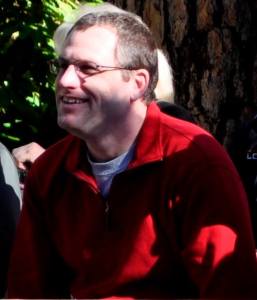 Joel has been a sportswriter and broadcaster since 1995, covering high school, small college and minor league sports for a handful of newspapers in Oklahoma and Indiana. He also anchored another high school scoreboard show in Oklahoma for several years.
Joel has also done basketball and baseball play-by-play for Oklahoma City University, calling two basketball NAIA National Championships with the Stars.
His non-sports radio travels have taken him to stations in Oklahoma City, Kansas City and Indianapolis.
Joel is proud alum of both Bethany High School and the University of Central Oklahoma. He lives in Oklahoma City with his wife, Jennifer.

Joel has been on Friday Night Finals since 2017.

The “Lawdog” Chuck Ramsey has been involved with Friday Night Finals in some form or fashion since 2014 when he began as a board operator which led to him filling in as a host from time to time. In 2019, he was the third on-air host bringing the top ten games of the week segment to the show.
In 2021, he retired from twenty nine years with the Oklahoma City Police Department and he took the place of legendary co-host Randy Renner and “police” the airwaves on Friday Nights.
Chuck has also worked as a producer for Oklahoma City Dodgers Baseball and high school football for 1340 The Game, learning under the tutelage of producers extraordinaire, John Zondlo and Jeff Gaddie.

Jeff has produced Friday Night Finals since 1998. Known as “The Enforcer,” Jeff tries to keep Randy, Joel and the show out of the ditch. Besides producing FNF, Jeff has produced Oklahoma City Dodger baseball on 1340 The Game, Oklahoma State football and basketball for 96.1 KXY and satellite engineered San Antonio Spurs basketball and several other college and high school broadcasts.

Calvin Wright has been on the FNF team since 2019.